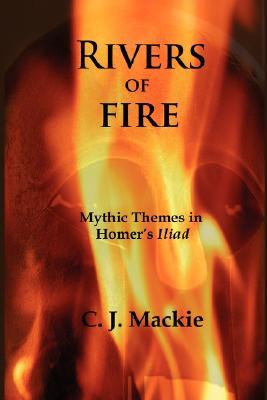 In the Greek mythical tradition there are early heroes like Perseus and Heracles and Bellerophon, who all make a name for themselves by confronting terrifying monsters (like Medusa and Cerberus and the Chimaera). And then there are later heroes, some of whom acquire their renown in the war at Troy (people like Achilles and Ajax and Agamemnon).

The central focus of this book is the way that Homers great epic poem the Iliad deals with these different generations of heroes. Heracles is a particularly important background figure in the Iliad, not least because he himself is meant to have sacked Troy in earlier times. In one sense the second Greek expedition against Troy rivals the earlier one, and is distinguished from it in many different ways. Rivers of Fire argues that in the Iliad an evolution in heroic conduct is meant to have taken place.

The earlier defeat of Troy by Heracles was completed with a level of humanity and compassion. The city survived and prospered after the crisis of Heracles defeat. The emphasis in the later sack of Troy in the Iliad, however, is on the use of fire as a means of utterly destroying the city. There will be no survival for Troy this second time around, once Agamemnon and his army are within its magnificent walls.

Mackie offers a compelling and very coherent interpretation of the Iliad. Its clear and jargon free style will make it an attractive addition to any reading list on epic. - Peter Toohey, Professor and Head of Classics, University of Calgary. This book is a significant contribution to our understanding both of Homer and of Greek myth. Moreover, its discussion of war and its consequences strikes a note very much in tune with our own contemporary world.