Iraq from Monarchy to Tyranny: From the Hashemites to the Rise of Saddam Michael Eppel 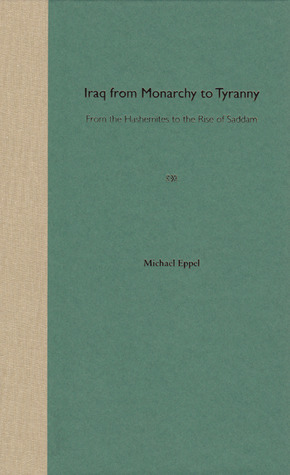 Between 1958 and 1968 Iraq was governed by several radical revolutionary regimes, military dictatorships that allowed some social and political expression and worked to modernize the country. Despite frequent violent disturbances, political life was tolerably stable.However, divisiveness among military officers and the exhaustion of the modern middle class, which remained dependent upon the state and the regime, helped the Baath Party become an effective political force.

As the state benefited from financial resources derived from oil revenues, the ruling elites were able to weaken all other forces and the Baath Party exploited these conditions to seize power. After years of behind-the-scenes manipulations, the atmosphere was ripe for Saddams presidency in 1979. Weaving these events into their global and regional context, Eppel offers a compelling explanation of the failure of the old elites and their successors and of the conditions that allowed Saddam to create his dictatorship. He also includes an epilogue with a general outline of Iraqs history from 1979 until Saddams fall in 2003.Eppels primary sources were Iraqi newspapers, memoirs of Iraqi politicians, British and U.S.

archives, and United Nations publications, as well as 23 volumes from Iraqi archives that contain the minutes of the revolutionary court that tried both the Hashemite monarchy and those who opposed the revolutionary regime.

Comments
Comments for "Iraq from Monarchy to Tyranny: From the Hashemites to the Rise of Saddam":