How Desmond Cartes is Deprogramming Himself through Pain B.F. Moloney 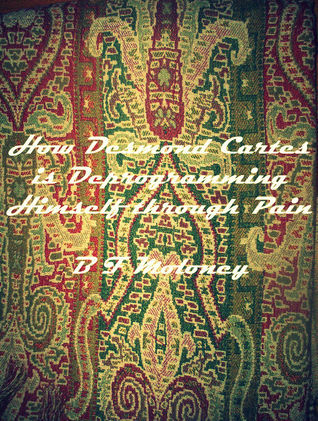 Like in B F Moloney’s many parfables this one ends at its beginning.Opening extractDesmond Cartes is a person who never doubted anything he was told. He is no ordinary man because now, he is going through a painful change, to right himself and begin again. We might first briefly delve into his child psychology and see where his troubles began. His parents told him what he needed to believe in order for him to get by as a trusting adult in a difficult world.

It is best to unconditionally believe conditionally, and therein lay the truth they told him. Desmond, young and vulnerable as he was, put all his trust into his parents. He would wouldn’t he, for as they loved him and he loved them, it was an easy thing to do. His parents were his first masters, his siblings were the next.

And like one of Pavlov’s experimental dogs Des, as we shall call him now, was always rewarded for never doubting what he was told. They were usually sugary treats, but sometimes his parents would give him an affectionate pat on the back.

And his watchoverful siblings? Well, they just whacked him whenever.There came to be no ambiguity or doubt in Des’ mind. That was pretty clear by the time he was at school. And even though moderate critical thinking was tolerated in class, in Des’ case he sailed through his assignments because he successfully regurgitated all that he was told.

He wrote and spoke very well. As did his classmates. There was no need to feel out of place or stand away from the crowd. Every child got a gold star. A good example of Des’ burgeoning confidence was when he was told in kindergarten that the earth was like a ball. Seeing that his head was also like a ball and round, as was Mary Pickering’s (his sweetheart) apple, without hesitation he accepted the premise, even though he did not have a direct experience of the earth being round. Markie Spinks, the class mischief, told Des after class that the earth was flat. But if the earth is flat why is Markie’s head round!

Later that week Markie’s head was flattened underneath a moving car. But by then Des had another belief ticked off and sectioned in his brain. His mental compartments were expanding, and he would grow to be a uncomplicated man.And by adulthood Des was also a ‘certainty’ man.

That is to say he was absolute in his convictions. Black is black, white is white and shades of grey ought to be impossible. A man’s truth should corrugate with age. His cynical pub acquaintances tell him he’s a dogmatic nut, not like them who drink to unwind- and he should be on medication, and if he gets worse they’ll get him institutionalised. They weren’t great friends. Des tells them they should seek inspiration from successful and ambitious politicians, and those business people and religious leaders empowered by their unshakable convictions. Though he cannot ‘witness’ their success, it is enough for him to not doubt theirs, and that is all he needs because he is just an ‘ordinary’ man.

His leads have come from a variety of ‘success’ spectrums, from takeovers to dictatorships, Des’s favourite. And tyrants who were tyrants because of bloody success, violently removed by other more violent tyrants because of that success, and them brandishing success with gold and heads, satisfied Des with that- success comes in all languages, and when he rests Des’s peace of mind doth shimmy.

Comments
Comments for "How Desmond Cartes is Deprogramming Himself through Pain":