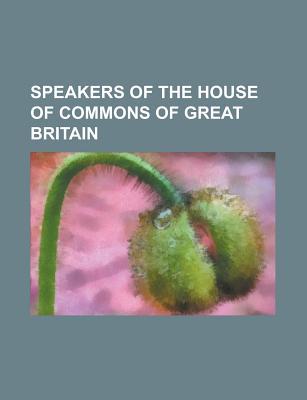 Excerpt: The Speaker of the House of Commons is the presiding officer of the House of Commons, the United Kingdoms lower chamber of Parliament. The current Speaker is John Bercow, who was elected on 22 June 2009, following the resignation of Michael Martin. He was returned as an MP in the 2010 general election and was re-elected as Speaker when the House sat at the start of the new Parliament on 18 May 2010. The Speaker presides over the Houses debates, determining which members may speak. The Speaker is also responsible for maintaining order during debate, and may punish members who break the rules of the House.

Unlike presiding officers of legislatures in many other countries, the Speaker remains strictly non-partisan, and renounces all affiliation with his or her former political party when taking office. The Speaker does not take part in debate nor vote (except to break ties, and even then, subject to conventions that maintain his or her non-partisan status). Aside from duties relating to presiding over the House, the Speaker also performs administrative and procedural functions, and remains a constituency Member of Parliament (MP). The Speaker has the right and obligation to reside in the Parliamentary estate, near to Big Ben.

The office of Speaker is almost as old as Parliament itself. The earliest year for which a presiding officer has been identified is 1258, when Peter de Montfort presided over the Parliament held in Oxford. Early presiding officers were known by the title parlour or prolocutor. The continuous history of the office of Speaker is held to date from 1376 (see definitive studies by the late Professor JS Roskell) when Sir Peter de la Mare spoke for the commons in the Good Parliament as they joined leading magnates in purging the chief ministers of the Crown and the most unpopular members of the kings household.

Edward III was frail and in seclusion, his prestigious eldest son, Edward the Black Prince, terminally ill. It was left to the next son, a f