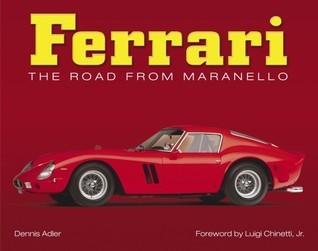 At the urging of a former colleague, Ferrari found a profitable niche for his creations in America–which still remains Ferrari’s biggest market.Now esteemed automotive journalist, historian, and photographer Dennis Adler presents Ferrari: The Road from Maranello–the stunningly illustrated story of one of the most coveted and recognized automobile lines in the world. Written with the full cooperation of the Ferrari works, this sumptuous book is illuminated throughout with more than 200 color and one hundred fifty archival black-and-white photos, some of which have never before been published.

Featured are many legendary Ferraris from road and track: the Tipo 125, Ferrari’s debut production racer- the Farina Cabriolet, the first Ferrari for consumers- the 212 coupe (the Inter)- the 365 GTB/4 Daytona- the 312 series cars that dominated world endurance racing in the early 1970s- the incomparable Testa Rossa and Berlinetta Boxer series- the brutally powerful F50, “the fastest road car ever”- and Ferrari’s Grand Prix and Formula One cars, driven by champions from Alberto Ascari to Niki Lauda to Michael Schumacher.Chronicled in interviews with racing legends including Dan Gurney, Carroll Shelby, and Phil Hill, as well as renowned Ferrari designers Sergio Pininfarina, Sergio Scaglietti, and many others is the fascinating history of Ferrari through its successes and failures, setbacks and triumphs.

Here are first-person stories of legendary battles pitting Ferrari against Ford, Porsche, and other marques on race circuits from Monaco and Monza to Daytona and Le Mans.Stylishly written and highlighted by magnificent photography, Ferrari is a fitting tribute to the ultimate expressions of automotive excellence.

Comments
Comments for "Ferrari: The Road from Maranello":